They say it’s hot everywhere in North America in July, and Shawnee Oklahoma was no exception with temperatures reaching 100 + during FCRV’s annual Campvention July 24 – 29. Approximately 500 people (242 rigs, 1 camp pass) had plenty to do and thankfully in air conditioned buildings at the Shawnee Expo Center. Biggest attendance was from Kansas and Colorado. 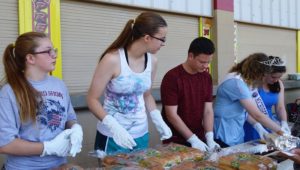 slide, numerous games, whipped cream pie throwing, and hot dog and burger lunch sold by the Teen Association. The first of 21 seminars covering everything from  convection ovens to Windows 10  were held as well as an afternoon pet parade. The evening program began with awards for members attending  who have belonged for 50 or more years. They included Wilma Schroedel 51, Duane and Ruth Keegan 50, Patty Wittmeyer 50, Wilma Plummer 56, Luella Sprague 50, and Juanita Woolworth 56 (she has attended every Campvention) and the Pitch & Pull Chapter, MO 50 years. Citations for outstanding service were presented to Sarah Carberry, PA and Lewis and Lyn Acre of Ontario. FCRV’S highest service award, a plaque was presented to Jacques and Carol Anderson, Ontario. A very surprised Craig and Shari Weber, IL, received the Hank Nathan Lifetime Achievement Award  (details in separate article). Entertainment for the evening was by Bill White from Texas who does an enjoyable tribute show to his late uncle, recording star Jim Reeves. Oklahoma capped the evening with a hospitality for all.

Tuesday morning was the golf scramble and later the Red Hat brunch. Adult activities sent folks off on a challenging scavenger hunt and the 66 Diner was open for lunch. FCRV Trustees

held an afternoon hospitality where retiring office manager, Sue Fromholzer was honored for 33 years of  service. The evening entertainment was preceded by the annual membership meeting.  Items discussed are in the board meeting report.  Past President Larry Roop installed Trustees, Shari Weber, President, Vodean Benham, Comptroller, George Walters , Vice President of  Programs, Sue Carlsen, Recording / Corresponding Secretary,  and Hugh Hicks, Vice President of Operations. Outgoing Executive Board Members recognized for their service were Marilyn Rausch, Dick  Likins,  Mickey Wagner, Ken and Sandy Kendall.  Scott Serbousek turned over $140 from the teen Fun Day lunch to wildlife and Scholarship.  Ventriloquist Greg Classen from Kansas kept the audience laughing, especially when he pulled Dal Dodson from the audience and made him part of the act. Michigan hosted an after program hospitality. 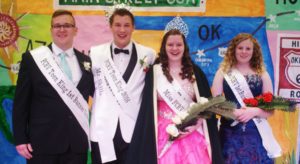 Thursday featured the final day of the commercial center. Nine vendors pre-registered and a few others were added on. Games continued with ladder golf and chapter sales went  from 9-11 a.m.  There were numerous seminars and meetings. The Wildlife silent auction concluded and the Great Lakes Region held a hospitality with information on next year’s Campvention July 9-15 in Lima, Ohio (info in separate article). Prior to the evening program the new Teen Queen and King Court were introduced followed by the adult games/sports awards and site decorating awards. In the youth building, a movie was shown ‘Drive In’ style with kids seated in cardboard cars which they built and painted. Meanwhile teen center hosted the Teen Queen’s Ball.  Stage entertainment was by the gospel / country group, The Williamsons from Oklahoma. 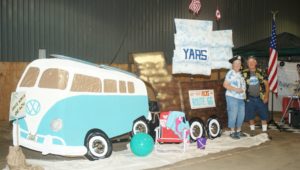 by chapters,  individuals and groups in the hall  and the audience did the walking. It kept the participants out of the hot sun or in this case the rain and was deemed successful enough to do another time. 15 units took part. The evening opened with parade awards and a tab collection donation of $133 to the local Ronald McDonald House and $475 and food collected during the week for two local food banks. Entertainment was by Michael Merrill from Texas singing old time country favorites. His final song was most appropriate for Campvention’s final night – “Happy Trails to You.”  Co- Chairman Rick Huston thanked Debbie Ludwig for her leadership and guidance. Debbie thanked Rick and Cathy and the Team Leaders, Ken & Paula Green, Faye and Forrest Tennyson, Dal and Barb Dodson,  Bob and Carolyn Owensby, Lawrence Phillips, Donella Wilkes, and Wanda Wilhelm and the 60 Committees from the South Central West Region of AR, LA, MS, MO, OK,TN, and TX. She also thanked those who attended and as the imaginary torch was passed to 2017 Chairmen, Linda and Dave Hennie. Shari Weber officially declared the  2016 Campvention closed and said “See you next year in Ohio.”