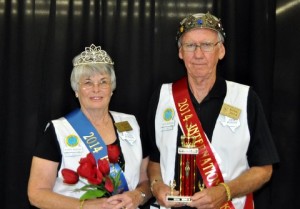 Dick and Kathy Buresh of Mission, Texas were elected as Family Camper & RVers 2014 International Retiree King and Queen at the Canton, Texas FCRV Retiree Rally March 29th. Dick and Kathy were raised in Iowa and met at IBM in Rochester Minnesota in 1966. They have two sons and six grandchildren. Dick retired from IBM in 1999. They went south in winter until 2005 when they became full time RVers and Texas residents.

Dick enjoys fishing, computers, and cooking and was a youth soccer coach. Kathy enjoys cross-stitch, embroidery, and quilting. She has knitted baby hats and booties for preemies and quits and afghans for missions and nursing homes. Both were in their church choir and Dick served as church treasurer for 4 years. Both have worked with Habitat for Humanity.

The Bureshes are members of Texas Retiree Chapter 89, Full Timers and Winter Texan Chapters of FCRV. They were introduced by Dick and Belva Sackett and attended their first Retiree Rally in Rayne, LA in 2008. The next year’s rally in Casa Grande, AZ were on the parking committee and Kathy chaired daily exercises. In 2010 in Ladson, SC they were co-chairmen for parking. In 2011 at the Canton, TX rally, they graduated to rally coordinators. When most people take a break after that much responsibility, they again took the job of parking chairman at the Tallahasee, FL rally in 2012, Rayne, LA in 2013, and Canton, TX in 2014. They were also parking chairmen at FCRV’S 2013 summer National Campvention in Amana, IA. As Dick and Kathy say, “We like to keep busy.” For more information see www.fcrv.org.