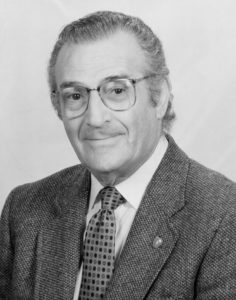 It’s with great sadness that we report the loss of our Founder, Hank Nathan. Here is what his daughter, Suzanne, sent.
Henry ‘Hank’ Nathan, 97, of Roseland, NJ, formerly South Orange, NJ; passed away peacefully on November, 24, 2016. Internment is on Sunday 11am at B’nai Abraham Memorial Park 2600 Rt 22, Union, NJ 07083. Hank retired in 1994 as the General and Convention Manager of the Fallsview Hotel, Ellenville, NY. He served with honor in the US Army, in the Combat Engineer Battalion, as a Specialist 1; spending 24 months in the European-African-Middle Eastern Theater. He was awarded 2 Bronze Stars for bravery, and received the Victory medal. Hank was the Founder of National Campers and Hikers Assoc. (known today as, the Family Campers and RVers Assoc.). It is the world’s largest non-profit camping organization, incorporated in 1949. As Founder of NCHA, Hank had the pleasure of meeting with several US Presidents; including sharing the stage with Former President Ronald Reagan, as he gave a speech to NCHA’s thousands of members in the 1984 Campvention at Beech Bend, KY. Hank was known for his positive outlook on life, warm scene of humor, sensitivity and goodness. He will be missed by all who knew him. He was predeceased by his beloved wife, Barbara, brother Joseph and sister Anne; devoted father of, Suzanne Sayers, her husband William, cherished Grandfather of Benjamin and Abigail; and several cousins, nieces and nephews. In lieu of flowers, donations can be made to FCRV Scholarship Fund, 4804 Transit Rd, Bldg 2, Depew, NY