The 2016 FCRV Retiree Rally will be held March 15-21 at the Terrebonne Civic Center, 346 Civic Center Blvd., Houma, Louisiana, 70360. The early days are March 11-14 to give you time to explore the surrounding Cajun Country prior to the rally.

Cajun Country? What is a Cajun? “‘Cajun’ is derived from ‘Acadian’ which are the people the modern-day Cajuns descend from. These were the French immigrants who were expelled from Nova Scotia, and eventually landed in Louisiana after decades of hardship and exile. Hearty folks from many backgrounds married into the culture, including Germans, Italians, Free People of Color, Cubans, Native Americans and Anglo-Americans. French or patois, a rural dialect, was always spoken. Due to the isolation of the group in the southern locations of Louisiana, they have retained a strong culture to this day.”

Houma is ‘Cajunicity’ – the joie de vivre, or love for life city. The swamps (bayous), the food, the culture, historic places….there is so much to see & do during your early bird stay.

Many have undoubtedly seen the History Channel’s Swamp People TV series. You’ve probably marveled at the swamps of Atchafalaya Basin, 2,500 sq. miles of swamp and vast wetlands, exotic wildlife, breathtaking flora, reptiles big and gigantic. Maybe you’ve had a desire to see the basin in person. How to see the swamps and wetlands? Visit http://www.houmatravel.com/ which will provide a list & information of businesses that will ‘get you into the swamps.’ Prepare for a thrilling journey into the area’s mysterious swamps with professional guides. Experience the unique eco-system from flora & fauna, beautiful, colorful birds, and, yes, the reptiles including the ancient kings of the swamps, the ferocious alligators, some measuring up to 13 feet in length. Experience the Swamp People environment ‘up close & personal.’

Another way to see the Huoma Cajun Country is in your own vehicle. Route 182 (also known as Louisiana Highway 182) stretches across a large part of southern Louisiana. Route 182 is a scenic stretch from Lake Palourde in the west, down through the southern end of Houma, and then back up to Louisiana Highway 1 by Raceland. Although it’s all beautiful and unique countryside, the parts around Houma, Louisiana are simply the best.

State Route 315, which is known as Bayou Dularge Road, will take you south, past the 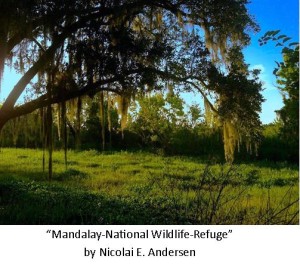 Mandalay National Wildlife Refuge, Lake De Cade and deep into the bayous themselves. The wetlands south of Houma, Louisiana are home to alligators, snapping turtles, otters, wildcats, black bears and over 250 species of exotic birds.

Seafood Lover? If you get on Grand Caillou Road (Louisiana Highway 57) from Route 182, you’ll go south past Lake Boudreau and Shrimper’s Row, down to where the road becomes Bayou Sale Road and turns north at Little Caillou Road. This is a great excursion from Route 182, as you will get to see Lake Quitman and the Cocodrie Marine Terminal. The route also takes you north, via Highway 56, through an area known for some of the best seafood in Terrebonne Parish.

Enjoy Cajun cooking which is defined as a home-cooked style that is rich with the ingredients at hand in the new world the Acadians settled into. A one pot, hearty meal is typical in Cajun cooking. 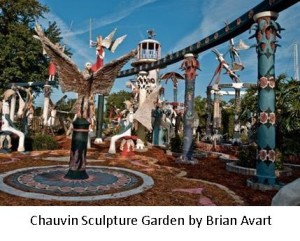 galleries, the downtown murals, and the Chauvin Sculpture Garden of over 100 life-size concrete statues created by famed artist Kenny Hill.

Little is known about the reclusive Kenny Hill, a bricklayer by trade, born around 1950. In 1988, he settled on some property on the bayou in Chauvin (pronounced show-van), Louisiana—population 3,400. Hill pitched a tent as his home and, over time, built a small rustic home that demonstrated an interesting use of space and attention to detail. Then, in 1990, without explanation, he began transforming his lush bayou environment into a fantastic chronicle of the world as seen through his eyes. 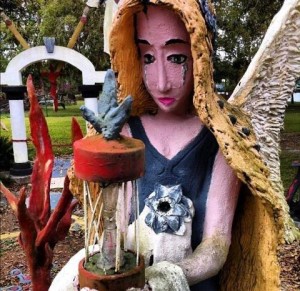 the narrow, bayou-side property. The sculptures are a profound mixture of Biblical reference, Cajun colors, and the evident pain and struggle of the artist’s life. Most figures—black, white, male, female, child, or solider—are guided, supported, or lifted by seemingly weightless angels. The unique angels, some inviting passage, others prohibiting, vary from blue-skinned, bare-footed, and sightless to regal celestial figures clad in medieval garb with the black boots of the local shrimp fishermen. (5337 Bayouside Drive, Chauvin, Louisiana 70344 (985) 594-2546. Open Monday – Sunday 8 AM – 5 PM)

For geocachers, there are over 20 locations to find. When you locate 20 or more caches, you will receive a signature Houma Travel geocoin.

Bob & Rita Letellier, Louisiana members, suggested that I share the Lake Peigneur sinkhole disaster. Lake Peigneur was a 10-foot deep freshwater body popular with sportsmen until an unusual man-made disaster on November 20, 1980 changed its structure and the surrounding land.   On that date, a Texaco oil rig accidentally drilled into the Diamond Crystal Salt Company salt mine under the lake. Because of an incorrect or misinterpreted coordinate reference system (the drillers thought the coordinates were in the Universal Transverse Mercator coordinate system when they were in transverse Mercator projection) the 14-inch drill bit entered the mine, starting a chain of events which turned the lake from freshwater to salt water, with a deep hole.

It is difficult to determine what occurred, as all evidence was destroyed or washed away in the ensuing maelstrom. One explanation is that a miscalculation by Texaco about their location resulted in the drill puncturing the roof of the third level of the mine. This created an opening in the bottom of the lake. The lake then drained into the hole, expanding the size of that hole as the soil and salt were washed into the mine by the rushing water, filling the enormous caverns left by the removal of salt over the years. Another explanation is an underwater stream naturally eroded into the enormous salt plug, inevitably making a sinkhole below the lake, which could have been exacerbated by Diamond Crystal illegally and dangerously mining in certain areas. 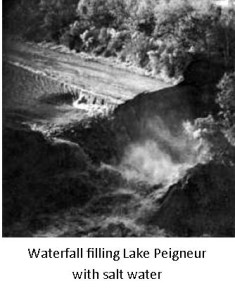 The resultant whirlpool sucked in the drilling platform, eleven barges, many trees and 65 acres of the surrounding terrain. So much water drained into those caverns that the flow of the Delcambre Canal that usually empties the lake into Vermilion Bay was reversed, making the canal a temporary inlet. This backflow created, for a few days, the tallest waterfall ever in the state of Louisiana, at 164 feet, as the lake refilled with salt water from the Delcambre Canal and Vermilion Bay. The water down flowing into the mine caverns displaced air which erupted as compressed air and then later as 400-foot geysers up through the mineshafts.

There were no injuries and no human lives lost. All 55 employees in the mine at the time of the accident were able to escape thanks to 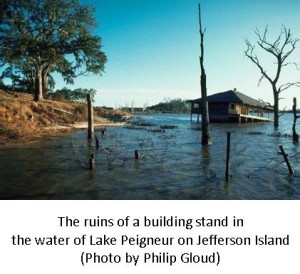 well-planned and rehearsed evacuation drills, while the staff of the drilling rig fled the platform before it was sucked down into the new depths of the lake, and Leonce Viator, Jr. (a local fisherman) was able to drive his small boat to the shore and get out. Three dogs were reported killed, however. Days after the disaster, once the water pressure equalized, nine of the eleven sunken barges popped out of the whirlpool and refloated on the lake’s surface. Visit https://www.youtube.com/watch?v=ddlrGkeOzsI which documents this disaster and visit Lake Peigneur while in Huoma.

Plan to attend the 2016 Retiree Rally and enjoy the surrounding Cajun Country with your fellow FCRV retirees in March.