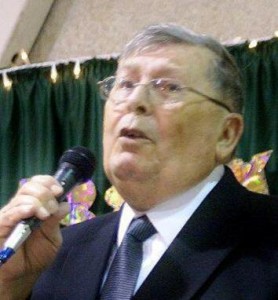 Singing was one of many passions of Eldon Sellers.

In addition to teaching Eldon was also a high school guidance counselor in Afton, Iowa.  Eldon last teaching job, however, was in Norwalk, Iowa, from which he retired as a fifth grade teacher.  When Eldon retired, he did so in order to better enjoy his family and grandchildren and camping.

Raised in Kansas, Eldon was the youngest of seven children, but being the youngest did not mean he was not looking out for his older siblings either.  In 1988, Eldon voluntarily gave a kidney to his sister.  She lived another 28 years because of his generosity.

In a common theme throughout Eldon’s life, Eldon and Glenda quietly moved within FCRV to serve others through various leadership roles.  They became field directors in Iowa in 1987 and co-chaired the 1987 Campvention, “Porky’s Heaven” as well.  They also co-chaired Campvention in 2000 and in 2007.  In 1996, Eldon became Second Vice President, an office in which he served until 2000 when he was voted in as First Vice President, and in 2004, at the end of his term as First Vice President, Eldon was elected to the office of FCRV President from 2004 to 2008.  Eldon continued to serve Family Campers and RVers as a Trustee in the capacity of Immediate Past President from 2008 to 2012.

Within the Iowa FCRV Association, Eldon served in every job available, plus he designed and worked on countless floats for Campvention Parades.

Additionally, Eldon loved to bake, and his cookies and melt in your mouth cinnamon rolls were always at church and school bake sale fund raisers.

Eldon, with his wife Glenda, was a longtime member of the Methodist church in Indianola, where their daughter Kristine was married and Eldon’s funeral was held this past year in an abundantly  filled church.