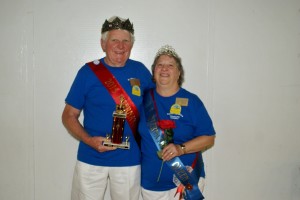 Emil and Mindy Pauwels of North Carolina are the 2015
FCRV International Retiree King and Queen.

results envelope and announced that the 2nd Runner-ups are Guy and Jeannie Dean of North Carolina, the 3rd Runner-ups are Paul and Eleanor Duggan of Massachusetts and the 2016 International FCRV Retiree King and Queen are Emil and Mindy Pauwels of North Carolina. After the crowning, congratulations, and photos the 2016 court and the past Kings and Queens led the group over to the building next door for the King and Queen’s Ball and Reception. Some great dance music was provided by the versatile Lee Ann Noel Band and finger foods, punch , coffee and decorations were provided by the YARS Chapter.
Sunday morning began with a Non-denominational Church Service by Retiree Chaplain, Harold Braley and the FCRV Choir. At noon a thank you luncheon was held for the workers and Chairmen, Bob and Nancy Linder gave certificates of appreciation to the various committee chairmen. Linders also received a certificate from National Retiree Director, Dick Likens. Co-chairmen for this year’s rally were Ron and Reba Ray.
On Sunday evening prior to the International Parade, Ashley and Gloria Taylor reported that 121 lap robes were donated by FCRV members to the North Florida Veterans Stand Down organization. 58 more held up at U.S. Customs will be arriving soon. On hand to accept was Claude Shipley who gave Ashley a Stand Down coin. Gloria Taylor welcomed Pastor Bob from the Lighthouse Children’s Home who was grateful for the $1,214 plus donation plus food from the Food Bank .Moneys were also included from church, book exchange, Red Hats and basket sales. Penny Ramlow drew the winner of a free registration for next year’s rally. They were Jerry and Dot Zimmerman of Connecticut. In fun, Bob Linder gave his wife, Nancy a ‘Best G.P.S.’ award.
Bill and Margaret Alderman presented the games awards and thanked everyone , especially the volunteer scorers and organizers who participated. Game results are in a separate article. Rita Letellier presented the Pet Parade awards (including beads from LA). Results are in a separate article. Jim Turner awarded golf prizes at the golf course. Results separate. Of course things got lively with the parade of states, provinces and specialty chapters. The 2015 Retiree Rally came to a quiet close with the retiring of the flags, a prayer for safe travels, and the singing of “God Be With You ‘Til We Meet Again.”