Chapter of the Year Award

The Explorers Chapter of Omaha, Nebraska became Chapter of the Year for their work in 2012. 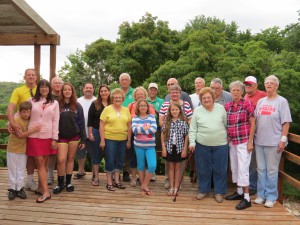 The chapter was chartered in November of 1965.  Currently there are 15 families in the chapter.  The following describes the chapter’s activities.

mile bike ride.  During our regular campouts some of our members just go for walks – a 1 mile walk.  We don’t turn this in because no one is interested in earn tabs just do it for exercise.

At our State Campvention, one of our members organized a presentation by Community Emergency representatives (Keith & Jeane Disnl) to come and put on a training regarding all types of emergencies – in your home, camping, etc.  The presentation used videos, handouts and a question and answer period.  It was extremely educational to all that attended.  Of our chapter members thirteen (13) members attended.

The Explorers do an annual conservation project each year at Mahoney State Park.  The project is done in April each year to help get the park ready for visitors.  The activities were performed for a total of 8 hours.  Our members did cleaning in the Marina area, pool area, raking of leaves, raking off a large area around cabins and putting down new grass seed, picking up trash around the lake and cabin area.  Fifteen (15) members of the chapter participated.  We also opened up the project to some ROTC kids from a local school so that they could earn community service.  We accomplished a great deal of work for the park that day.  Our chapter also collect pop tabs and donate them to the Ronald McDonald House.

We have four teens in our chapter.  Our teens participated in our conservation project at Mahoney State park and also in other Good Samaritan projects in which the chapter does which are noted in the Community Activity of the Chapter.  Our State Teen Directors are members of our chapter and they work with the teens at our statewide.  Also we work with teens in the ROTC program at a school to help them with community projects such as conservation.  Chapter gave $50 to our teen that was graduating from high school.

Members write letters for children applying for scholarships through FCRV.

Our chapter did not do a scrapbook this past year.  A couple in the chapter however has helped the National Historian several times with the program.

August, 2012 – newspaper article in State Park’s paper for all the things that our chapter has done in reference to getting grants and conservation projects for the park.

November 2012 – Radio coverage for FCRV with our chapter activity at Mahoney State Park earning funds for our Good Samaritan Projects (such as helping children with disabilities).  This was during a craft show in which we worked.  Joanie Stone, member, has gone before the legislature in Nebraska as a representative of FCRV on behalf of the park system in Nebraska in 2012.  Also when we attend craft shows and sell our chances we have FCRV materials available to talk to individuals about the organization.

Our chapter purchases three items in which each year we sell chances on to earn funds to do Good Samaritan Projects.  This takes a lot of effort on our members to attend craft shows etc. selling the chances in order for us to donate to worth while projects and people.  Examples are the following as well as other volunteer efforts in the name of FCRV in 2012.

–          January, Donated $100 for the Backpack Program.  This program makes up care packages for under privileged children in the community that don’t have enough food to take them through the weekend.

–          February – Purchased cases of Ensure for a former member dying from cancer.

one of our state parks.

–          Two families volunteered at Ponca State Park for their Expo for three days.

–          October – Donated $100 to the Shriners’ to help with transportation costs to take children to the burn center.

–          November – Donated $250 to Kellom School to purchase sweatshirts, long pants, scarf’s, mittens for refugees coming to this school from another country.

–          December – Members purchased food and made a dinner for the families at the Ronald McDonald House.  After the dinner, Santa came and gave each child a gift that was at the house. (Santa was a member of the chapter and the chapter purchased all the gifts.

–          December – Chapter did an Adopt a Family – it was a mother and two children. The chapter purchased gifts for the children (4 items each) and a gift certificate for food for the holidays.

–          Three families volunteer and do camp hosting at Mahoney State Park.  Thesefamilies donated a total 16 weeks in 2012.  The camp hosting program was started several years ago at the  state park by a couple in our chapter.  This program has now grown to all the state parks in Nebraska.