Campvention goers enjoyed the Amana Colonies area of Iowa, especially the shops and restaurants.  The level grounds of the Event Center, originally built for agricultural fairs and nestled between corn fields, was a perfect setting for all Campvention 2013 activities.  Being so close to Iowa City, several took the tour of the Iowa City Ronald McDonald House. 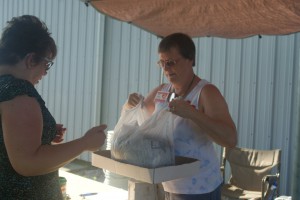 Dawn Baker and her volunteers had plenty for the youth who were 12 years old and younger: such as Police & Fire Day, Water Fun  & Safety, 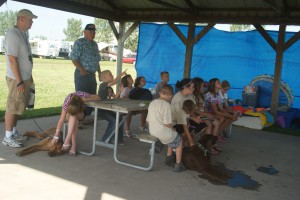 The adults also had activities starting with a Meet & Greet. Throughout the week there was Pegs & Jokers, 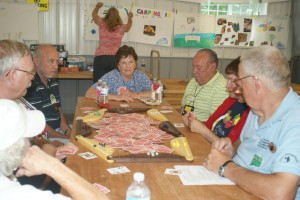 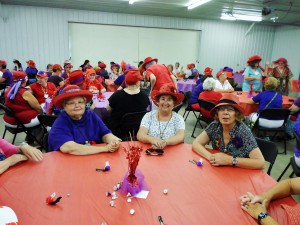 The guest speaker was a representative of the Amana Colonies who discussed family life in the early days.  Judy Hiatt hosted.  Something new this year was a Hard Hat Lunch [pictured below right] for the men hosted by Ken Kendall. 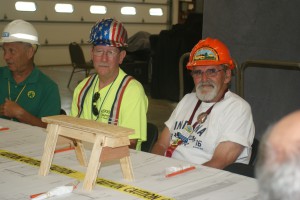 The tables were covered with blueprints and caution tape.  Miniature saw horses and carpenter pencils were given as table prizes.  Rich Gassman dicussed current day farming in the Amana Colonies. 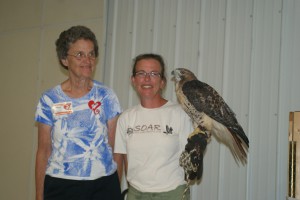 What is a Campvention without meetings? FCRV State and Provincial Program Ddirectors met with their National Program Directors, the FCRV Executive Board met Saturday before Campvention officially opened, and groups such as the Ambassador Club, Kentucky Colonels, Full Timers Uie Club,  YARS, Winter Texans,  Amateur Ham Radio, and First Timers also met during the week.

Hospitalities are always a favorite activity.  States/Provinces, Regions, and other groups hand out treats and drinks such as ice cream, cookies, or root beer floats.  This year’s hospitalities were hosted by 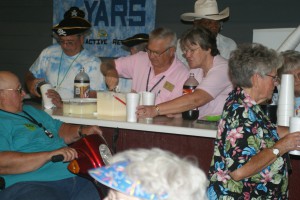