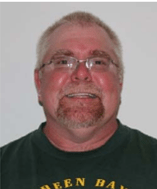 It is many people’s idea of a worst-nightmare car crash:
– No real signs of an accident, save for the fresh skid marks that most drivers would barely even register as they drive over them on their morning commute. Those who did see them, might ask themselves, “Were those there before?” or “I wonder how long they have been there and how long it has taken me to notice them?” or merely look right passed them in their rush to work or school or another important appointment.  …  You are incoherent and have no idea where you are, not to mention how you got there.  And through the flashes of your life and indescribable pain, you sense that only the good Lord knows how long it will last.

If it were not for Dale Berg and the good Lord, on Wednesday, February 8th, 2012, the worst of the worst-nightmare scenario was nearly a reality for Steven Sonntag.  Like any other given Wednesday, Dale was on his way to work around 06:30 when he noticed “some black tire marks on the road…he passed them, but something told him to turn back and investigate.  He did and found a car in the river.  [Initially, Dale] could not find anybody and called 911 to report it.  While on the phone with the 911 operator, he heard some moaning, went back, and found a guy out of the car in the woods.” as related by Dale’s wife Cheryl about a month later via her Facebook status. Cheryl continued to share the good news with family and friends alike in the same post, which spoke of a letter the man’s parents had sent Dale:

Dear Mr. Berg,
From what a friend of ours was able to determine just recently, you were the man who helped our son Steve after his car accident on Highway A on Wednesday, February 8.
We are so grateful that you took charge of the situation and called for help.  It was a very close call for Steve since he actually stopped breathing once he was loaded on to the med flight.  Your action and assistance saved his life.
Steve has a broken leg and is healing from the brain trauma he suffered in the accident at an amazing rate but he may need further outpatient therapy when he is released from the hospital (maybe next week).  He is talking and smiling and we are very happy parents to still have him with us.  Needless to say, his wife and two young children are also extremely happy that Steve will be around to enjoy his family.
With deepest gratitude,
Bob and Bobbie Sonntag